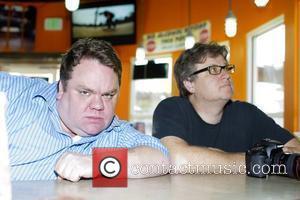 Picture: Preston Lacey and Rick Kosick of 'jackass' hang out at the bar of Wee Man's branch of Cronic Tacos in Redondo Beach Redondo Beach, California...

Jackass star Johnny Knoxville was once stabbed in a bar fight - but insisted on having one more drink for the road before heading to hospital.
The Dukes of Hazzard actor was at a bachelor party with pals when three thugs attacked him following a slanging match outside.
Knoxville did his best to defend himself but realised after his assailants fled that he was bleeding.
He recalls, "We'd been fighting a couple of minutes and my hand was slashed and my back was slashed... I had to go upstairs and get my friends out of the bar; we had another drink and they drove me to the hospital.
"The hospital was, like, a half a mile away but they made a succession of wrong right turns and it took me an hour and a half to get there."