'Bad Grandpa' debuts this weekend as No.1 at the box office, knocking 'Gravity' off the top spot.

After 3 weeks of 'Gravity' occupying the Box Office top spot it has finally fallen to the second position as Johnny Knoxville's 'Bag Grandpa' rises to No.1. The new 'Jackass' spin-off claimed the top position by debuting with an impressive $32 million according to studio estimates from Rentrak. This surpassed most predictions which estimated around the $25 million mark. 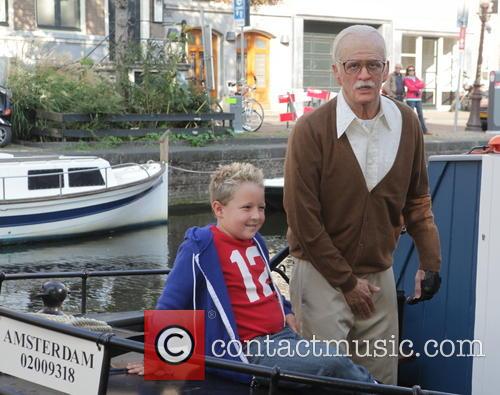 Knoxville and Nicoll in 'Bad Grandpa'

The 4th 'Jackass' movie was directed and co-written by Jeff Tremaine, one of the creators and director of MTV's 'Jackass'. 'Bad Grandpa' follows an 86 year-old grandparent, 'Irving Zisman' (Knoxville), who takes his grandson 'Billy', played by Jackson Nicoll, on a road trip across the USA in a hidden camera comedy spectacle.

The film follows a very similar premise with the three previous 'Jackass' movies as it plays pranks on unaware members of the public and features Knoxville performing stunts he became famous for. However, believe it or not, this film has a storyline which depicts Zisman taking his grandson to live with the 8 year-olds father after his mother is jailed.

Don Harris, Paramount's president of theatrical distribution said, "It's a spectacular result." He also thought the film is "playing much more like a regular comedy than like a 'Jackass' movie" and cited the audience were more women and older moviegoers, it "wasn't just a bunch of teenagers."

Critics have surprisingly praised the comedy with 62% of them giving it the thumbs up according to Rotten Tomatoes.

Tim Robey from the Daily Telegraph thought, "Bad Grandpa has no goals whatsoever beyond making you snort with base, moronic glee, but when it scores, it scores."

Bilge Ebiri of Vulture was surprised with the movie, he commented, "For all its flaws, it might just be the most heart-warming movie of the year."

It isn't a surprise that others critics were not fond of the R-rated movie's raunchy humor as Dave Mcguinn from Globe and Mail added, "It's been 11 years since Jackass: The Movie, and three since Jackass 3D, although it feels a lot longer than that."

'Bad Grandpa' was released in theatres on October 25th 2013.

'Bad Grandpa' is No.1 at the Box Office