Johnny Depp introduced footage of The Longer Ranger at CinemaCon, where Disney made some big announcements. 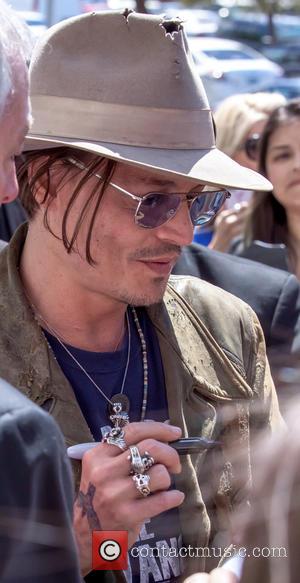 Johnny Depp and director Gore Verbinski shared 20 minutes of exclusive footage from The Lone Ranger at CinemaCon on Wednesday (April 17, 2013), while Disney confirmed it would release the next three Star Wars sequels every summer beginning with Star Wars: Episode VII in 2015.

The Lone Ranger - which cost $225 million to make - is the riskiest title of the summer. Though it boasts a huge pedigree, with Depp on-screen, Verbinski behind the camera and Jerry Bruckheimer producing, there's little evidence that audiences actually want this movie. Still, the audience appeared to respond well to the exclusive footage at CinemaCon and the cast and crew remain confident. "We saw the picture yesterday and it looks terrific," said Disney chairman Alan Horn, who led the company's presentation. One exhibitor told the Hollywood Reporter, "It looks good," which doesn't exactly scream "Award winner!" but we guess it's something.  In the first clip shown, the Lone Ranger (Armie Hammer) and Tonto (Depp) meet for the first time, while in the second, Tonto saves the Lone Ranger from near-certain death.

As well as the Star Wars announcement, Disney pushed the fact that it now owns Marvel Studios, LucasFilm and Pixar. Horn also treated exhibitors to a full screening of Pixar's Monster's University. The animated prequel hits theaters in the U.S. on 21 June 2013.

Watch The Lone Ranger trailer below!