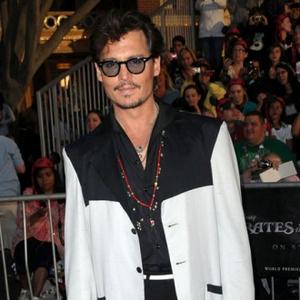 Johnny Depp has revealed it was a "psychedelic experience" to find himself on the Pirates Of The Caribbean attraction at Disneyland.

The 47-year-old actor stars as Captain Jack Sparrow in the movie franchise based on the popular theme park ride and Johnny revealed he and co-star Geoffrey Rush (Captain Hector Barbossa) found it surreal when they realised they had been incorporated into the attraction.

He said: "It's pretty psychedelic actually. I suppose you could make it even more psychedelic, but we probably shouldn't go into that. But yeah, the idea of wandering through this ride and, suddenly, there you are, three times over. Geoffrey had a similar experience. He had to go and get his head round it as well. It's quite an honour in a weird way, that what you helped create becomes this forever object."

Along with seeing his character on the theme park ride, Johnny revealed he often finds himself slipping back into character especially when his kids 12-year-old daughter Lily Rose and nine-year-old son Jack are around.

He said: "I can't shake Jack [Sparrow]. He won't leave me alone and keeps showing up at odd times. In fact he arrived this morning when I was getting the kids ready for school. I had to shoo him away."