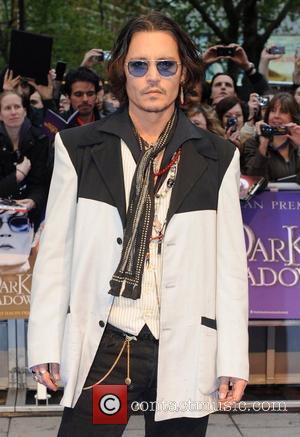 Johnny Depp has finally shut down reports he has split from Vanessa Paradis, insisting, "No matter what I say about this, people believe the opposite".
The Pirates of the Caribbean star began dating singer Paradis in 1998 and they have set up home in the south of France with their two children, Lily-Rose, 12, and Jack, 10.
Earlier this year (12), gossips suggested the couple had begun to live separate lives due to growing tension about the actor's booming career, and speculation about a separation continued to swirl as Depp and Paradis played coy about the status of their relationship in media interviews.
The lovers of 14 years have not been photographed in public together for some time, and French star Paradis left Depp to walk the red carpet solo on Wednesday (09May12) for the London premiere of his new movie Dark Shadows.
But Depp, 48, has now spoken out to quell the claims once and for all, telling Britain's The Sun newspaper, "No matter what I say about this, people believe the opposite. I can't say enough about it (the relationship) not being over. The rumours are not true. They are absolutely not true."