Johnny Depp will return to his iconic title role from 'Edward Scissorhands' in a forthcoming episode of 'Family Guy'. 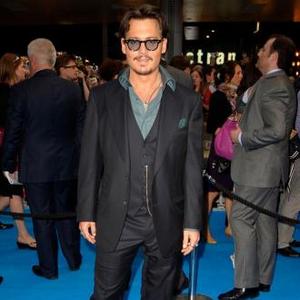 Johnny Depp is to make a cameo appearance in 'Family Guy'.

The 'Dark Shadows' actor will return to his title role from 1990 movie 'Edward Scissorhands' for a brief gag in the adult animation.

The 49-year-old star - who recently confirmed he had split with long-term partner Vanessa Paradis after 14 years together - initially struggled to get back into character but found inspiration by watching clips from the film.

'Family Guy' executive producer Mark Hentemann told Entertainment Weekly: ''When he was in the booth, he said that he felt like he hadn't done that voice since he did it in front of the camera.

''[But] he was able to snap right back into Edward Scissorhands once we pulled up a clip from the movie.''

Johnny impressed everyone involved in the show with his performance - particularly the female cast and crew members.

Mark added: ''He was amazing - and demonstrated extraordinary patience with all the fawning women in our office who swarmed him.''

Though it is not clear when Johnny's appearance will broadcast, the new series of 'Family Guy' returns to TV on September 30.