Johnny Depp has revealed Ricky Gervais made him shove ''a midget down a toilet'' when he filmed a cameo in the comic's new TV series 'Life's Too Short'. 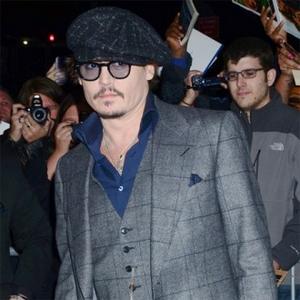 The actor has a cameo role in the comedian's upcoming sitcom 'Life's Too Short' - which stars diminutive actor Warwick Davis as a fictionalised version of himself - and he has revealed he plays a violent dwarf.

Although Depp was a little shocked by The Script at first, he insists the scenes are very funny and has praised Gervais' talents as a writer.

Speaking at the New York premiere of his new movie 'The Rum Diary' - which is based on the novel of the same name by Hunter S. Thompson - he said: "Ricky's the funniest guy alive. I did a cameo for his HBO show 'Life's Too Short', which is out soon. You can't believe things he made me do. In it I play a dwarf, and he had me shove a midget down a toilet. He has this great sense of humour. I loved working with him. He's so hilarious, I'd marry him."

The Hollywood heartthrob joked the scenes are so shocking they could have a negative effect on his future career.

Depp, 48, added to the New York Post newspaper: "My email to him (Gervais) read, 'Upon this debut I anticipate an immediate 95 per cent plummet in my earnings. Thank you for ruining my career.' "