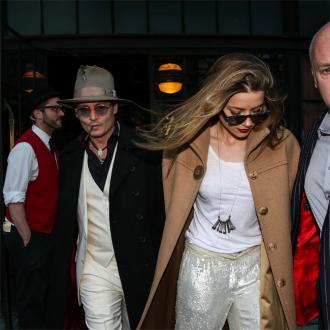 Johnny Depp has renamed the £21.5 million yacht he gave to ex Vanessa Paradis as a wedding gift for Amber Heard.

The 51-year-old actor saved some money by giving the super boat a new title, Amphitrite - after the ancient Greek queen of the sea - and ditching its old moniker, Vajoliroja, which was named after himself, former partner Vanessa, who he split from in 2012, and their children Lily-Rose, 15, and Jack, 12.

However, the 'Pirates of the Caribbean' actor did dip his hand in his pocket to splash out on two ''his and hers'' Shetland ponies for the 28-year-old actress, who he married at their Los Angeles home on Tuesday (03.02.15).

The couple will tie the knot for a second time tomorrow (07.02.15) at Amber Beach on the star's £2.4 million private island, Little Hall's Pond Cay, on the Bahamas - where his yacht is moored - and Johnny is going to get his guitar out and team up with guest Alice Cooper to perform at the reception.

An insider told The Sun newspaper: ''Johnny and Alice are going to be performing at the reception after the non-religious ceremony in the day. But they're going to have a hugely expensive fireworks display in the evening with A&J spelt out in the sky.

''They're adding in little touches so it'll be a really special day.''

Several other stars are also flying over to the island for the couple's second nuptials including heavy metal star Marilyn Manson, Aerosmith frontman Steven Tyler, music producer Rick Rubin and movie producer Jerry Bruckheimer - but they shouldn't be expecting to down too many drinks at the reception.

The insider added: ''It won't be particularly wild or boozy as some of the guests, like Alice Cooper, don't drink and Johnny has been cutting back on drinking for ages now.''

But the guests should be guaranteed a good night's sleep as they will retire for the evening at Johnny's newly-named yacht.

Johnny purchased the magnificent vessel in 2007 and had it completed re-fitted to his vintage, classic taste.