Johnny Depp Parties Till The Early Hours With Aerosmith 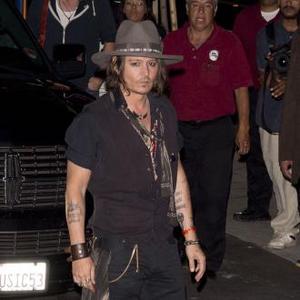 Johnny Depp and Aerosmith partied until the early hours on Monday night (06.08.12).

The 'Pirates Of The Caribbean' actor - whose split from long-term girlfriend Vanessa Paradis was officially confirmed in June - joined the 'Crazy' rockers at Harry Morton's Pink Taco Sunset Strip in West Hollywood, Los Angeles, which the group's lead singer Steven Tyler rented out.

An onlooker told PEOPLE that Johnny looked in ''high spirits and [seemed to] really enjoy the party''.

The insider revealed the 49-year-old actor spoke to a number of fellow stars at the event, including Jim Carrey and Liv Tyler, before leaving around 2am.

Earlier in the night, Johnny joined Steve and Joe Perry for their show at Hollywood Bowl and he stunned the audience by jamming with the pair on 'Train Kept a Rollin'.

Liv and Jim seemed to be enjoying the performance, which saw Johnny wearing his signature Walker hat and bracelets.