The actor isn't letting his break-up get to him too much.

Johnny Depp is doing everything he can to take his mind of his messy divorce situation with Amber Heard, and if that means hanging out with pretty Scandinavian girls after a rock show, then so be it. The actor took some time out to unwind with a few fans in Europe. 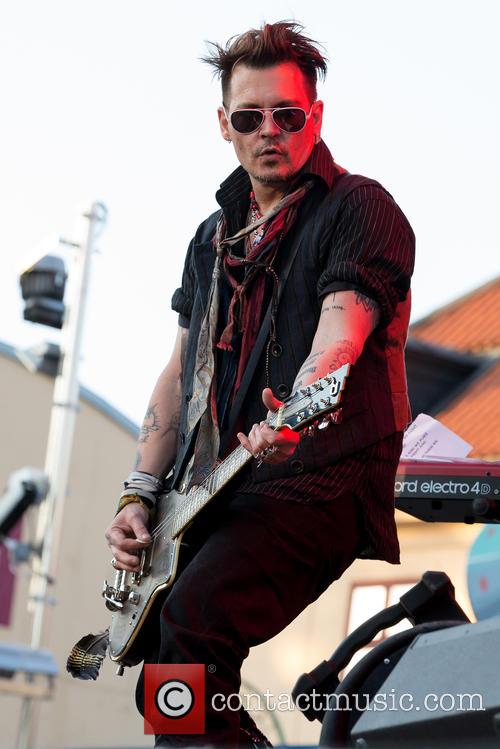 Johnny Depp distracts himself in Denmark

The 'Alice Through The Looking Glass' star is currently on tour with the Hollywood Vampires (a supergroup also including Alice Cooper and Aerosmith's Joe Perry) in Europe, and on Wednesday (May 1st 2016) he hit Denmark, where he put a brave face on for his fans and mingled with the locals at the Hans Krull Tavern in Aarhus.

'Johnny was having a good time', a source told Us Weekly. 'Anyone that approached him got a pleasant response from him, and he seemed in a really chatty mood.' It seems a far cry from what he is being presented as by ex Amber Heard's legal team, who have been accusing him of prolonged physical and psychological abuse in the relationship. Depp has denied all allegations.

More: The many hairstyles of Johnny Depp

'A few guys asked for selfies at one point and he happily obliged', the source continued. 'It was a pretty tame evening. Johnny just wanted to hang loose with friends and unwind.'

52-year-old Depp was also seen hanging out at the Grand Hotel in Sweden earlier this week, where TMZ report that he was getting friendly with fashion blogger Desiree Nilsson and model Andrea Jay. According to the publication, when Nilsson tried to approach him in the hotel lobby, she was prevented from getting too close by his bodyguard before 'Johnny waved her in and within no time he was holding her hand and touching her back'.

Well, he is single now after all! The European fun is over now, however, as he returns to the US to continue the Hollywood Vampires tour.