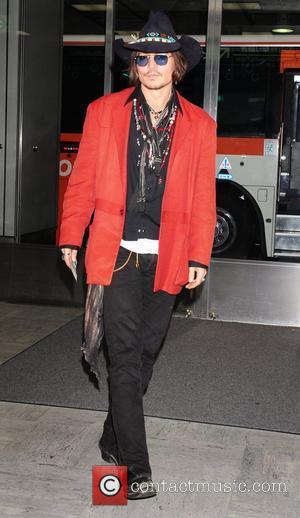 Actor Johnny Depp has been formally inducted into the Comanche Nation as the newest member of the Native American tribe.
The Pirates of the Caribbean star has touted his unique ancestry over the last several years, recently revealing his great-grandmother was a Cherokee Indian.
And now, as Depp portrays Comanche Nation fictional character Tonto in a movie reboot of classic western TV series The Lone Ranger, organisation officials have invited the actor to embrace his family history and become an official member of the tribe.
LaDonna Harris, the president of Americans for Indian Opportunity, says, "Johnny is reprising the historic role of Tonto, and it seemed like a natural fit to officially welcome him into our Comanche family.
"I reached out, and Johnny was very receptive to the idea. He seemed proud to receive the invitation, and we were honoured that he so enthusiastically agreed."
The 48 year old accepted the honour at Harris' home on Wednesday (16May12) in Albuquerque, New Mexico, where he is currently on location shooting the action-adventure film.
Depp, wearing ripped jeans and eyeliner, arrived bearing gifts as a customary sign of appreciation for the tribal elders and he subsequently took photographs with several members of his adopted family.
And Harris admits the group had a lovely time getting to know the movie icon, adding, "Welcoming Johnny into the family in the traditional way was so fitting. He's a very thoughtful human being, and throughout his life and career, he has exhibited traits that are aligned with the values and worldview that indigenous peoples share."
It's not the first time Depp has met with tribal officials while shooting The Lone Ranger - the actor took part in a summit with Navajo leaders on the set of the movie to make sure they were OK with him filming on sacred land.
Depp and co-star Armie Hammer held a meet-and-greet with Navajo Nation elders Ben Shelly and Rex Lee Jim in April (12) and swapped gifts and posed for photos.
Shelly said, "He was respectful, along with very patient with picture taking. It was a great honour and privilege to meet Johnny Depp and we are honoured the movie is being filmed here on the Navajo Nation."