Johnny Depp's '21 Jump Street' cameo was ''crucial'' to the movie, according to executive producer and star Jonah Hill. 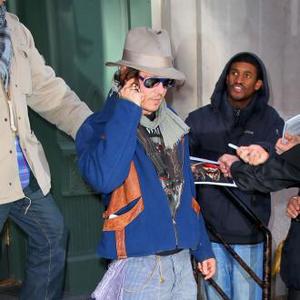 Star and executive producer Jonah Hill says he always wanted Johnny To make an appearance in the big screen adaptation of the TV show which made him famous and believes the Hollywood hunk found it ''cathartic'' as he left the show after the fourth season.

He told movies.ie: ''It's like stepping into the 'Star Wars' world, and trying to avoid Darth Vadar. It was pretty crucial to me that Johnny came on board for a cameo. Once he agreed, it was a case of finding a funny way to do it. I reckon most people - if not all - will be hard-pressed to spot him until he Steps forward. Johnny's a great sport, and always up for a laugh, so, he was pretty much game for anything. In the end, he felt it was cathartic too, a chance to say sorry, in a way, to his co-stars for bailing on them.''

Jonah always wanted to see a big screen adaptation of the show and is thrilled he is the one who has made it happen.

He said: ''In America, the show was a very big deal. And it was such a neat idea for a comedy, I always had it in the back of my mind that someone should try and bring it to the big screen one day. I never thought it would be me. Well, I say that, but I was always secretly hoping it would be me, of course.''