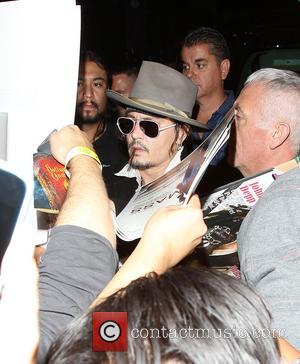 The Hollywood actor was in the city for a performance at the Rock in Rio festival with his band Hollywood Vampires on Thursday (24Sep15).

Johnny was also joined by his wife Amber Heard to take part in a charity mission with Starkey Hearing Foundation, and all three stars helped fit hearing aids which were given out to more than 200 kids and adults.

Pictures from the event show Amber in tears as she helped a woman hear properly for the first time.

"Hearing connects us to life, our families and to the world around us," explains Bill Austin, founder of the Starkey Hearing Foundation. "It's a precious gift, and we are excited to work with the Hollywood Vampires to introduce so many to the world of sound and help them hear music for the first time."

Recipients of the hearing aids were invited to test the devices out by watching Johnny perform with the band at the festival.