Johnny Depp Enjoyed The Madness Of Alice Through The Looking Glass

With the media busy conjecturing about the end of Johnny Depp's brief marriage to Amber Heard, the actor would clearly rather be talking about his latest movie, the sequel Alice Through the Looking Glass. "Doing this film was a real treat," he says. "I'm not a big movie watcher of myself. You always think there's something more you could do, or something different. So coming back, I had the opportunity to do that and give a more interesting performance. It was lovely to explore this story of Alice and Hatter." 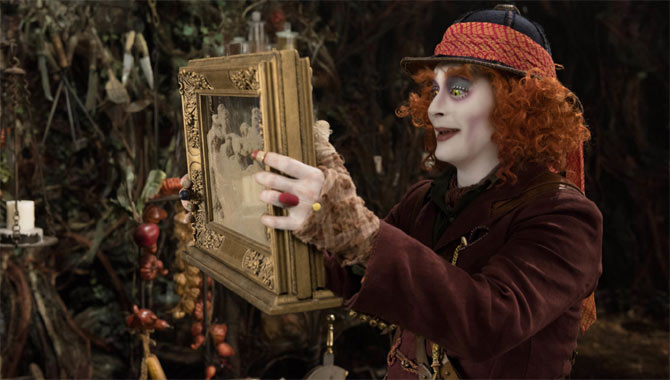 In this film, Depp's Hatter is at a very low point, wasting away in his grief and regret. "Hatter has gone noticeably further down the road of insanity," Depp says. "If you are crazy or have some sort of mental dilemma, but you're not aware of it, it's great. If you're aware that you're crazy, it'll eat you alive! So this time, there are so many things Hatter has to question. It's taking the Mad Hatter and making him even more mad, more confused, more lost, more paranoid."

And Depp found a reason why the Hatter was so mad. "Back in the 19th century, the glue hat-makers used to form the hats was rife with mercury, so a lot of the hatters started going sideways due to the mercury fumes. There's truth in that," he adds, then laughs. "Also they weren't able to get Apple TV!"

Depp enjoyed reuniting with Mia Wasikowska as Alice, and also had fun running off-the-cuff gags with new cast member Sacha Baron Cohen, who plays Time. "There's a scene when Hatter and Time meet for the first time," he says. "Hatter, with good reason, makes a mockery of Time. So in one take, Sacha and I just improvised for 30 minutes. Out of the corner of my eye, I could see crew members walking off to lunch and leaving us to it. I didn't blame them!"

Now in the middle of a media storm, he wishes he could travel back in time like Alice to offer himself some advice. "I'd say search for simplicity in life," he says. "Stay away from anything that makes a bunch of people stare at you when you're in a restaurant, or follow you back to your hotel. Try to avoid people who write incredibly, sometimes entertaining, but fictitious things about you!"

Watch the trailer for Alice Through The Looking Glass: