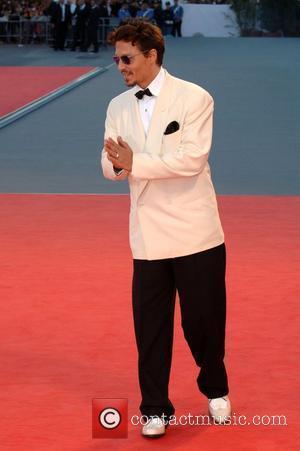 Johnny Depp fears British thespian Alan Rickman will never work with him again after terrifying his co-star with close shaves in new movie musical SWEENEY TODD. Depp feels sure Rickman hated the experience of having the film's star at his throat with sharp razors. And he thinks he only signed up to play in the film because he thought Depp would take shaving lessons before playing the demon barber of Fleet Street. The Pirates of The Caribbean star says, "Having worked with sharp objects before, everything was fine until I had to shave someone. The shaving cream made me really nervous. It was the most uncomfortable moments of my life. "I had to shave poor Alan. He really didn't enjoy it, so I'm sure, in that sense, he probably hated working with me. "I didn't go to a barber shop to learn but, at the same time, I didn't really slash anyone's throat, like my character does. I've never really experienced that full on thing." And making the movie has put Depp off visiting the barber: "This is a full beard for me now, this is a lumberjack thing for me. I can definitely appreciate the fear of sitting in a barber's chair, because when a stranger lathers your face up and there are sharp instruments around your throat... it's frightening."