When Alice Cooper finally turned his legendary 70s drinking club The Hollywood Vampires into an epic supergroup last year featuring Johnny Depp and Joe Perry as fixed members, rock fans everywhere went absolutely nuts. They went on to release a self-titled covers album, and performed several more extraordinary covers (many of which were tributes to Cooper's deceased friends who once belonged to his club) at Rock in Rio festival before embarking on their first concert tour this year. 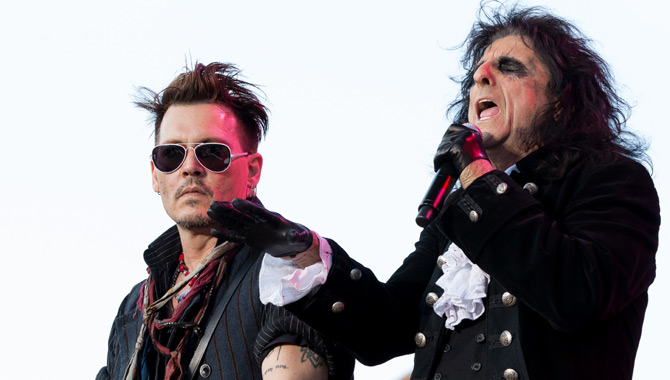 Johnny Depp and Alice Cooper in the Hollywood Vampires

Here are some of their best moments:

1. 'One' / 'Jump Into The Fire' (Harry Nilsson) - A smooth medley of Harry Nilsson's 1972 single 'Jump into the Fire' and his 1968 song 'One' which the Hollywood Vampired recorded for their self-titled debut studio album released in 2015. Nilsson was one of the original Hollywood Vampires' principal members, with his name being up there alongside Keith Moon and John Lennon on that famous Rainbow Bar and Grill plaque.

2. 'Brown Sugar' (Rolling Stones) - It's not clear if the Stones ever had a connection with Alice Cooper or the Hollywood Vampires drinking club, but nonetheless their 1971 hit was covered by the band at Brazil's Rock in Rio festival in 2015. Perhaps it was a tribute to Stones guitarist Keith Richards, who played Johnny Depp's 'Pirates of the Caribbean' character Jack Sparrow's father in the film series.

4. 'Manic Depression' (Jimi Hendrix) - Of course, a classic rock covers album wouldn't be worth listening to without Hendrix, and they opted not for one of his popular singles, but for the song 'Manic Depression' from his first album 'Are You Experienced'. It's unclear when exactly Alice Cooper's drinking club first started, with most sources putting it circa 1970, but sadly Jimi Hendrix would have probably already died before he could get into the group.

5. 'Itchycoo Park' (The Small Faces) - In honour of this English Mod band, the Hollywood Vampires recorded a version of their 1967 song 'Itchycoo Park', the title song of their 1999 compilation. The original song was a hit upon its release, reaching number three in the UK album chart and becoming their first entry into the US' Hot 100.

6. 'Jeepster' (T Rex) - Another major member of the original Hollywood Vampires was Mark Bolan, and so Alice Cooper and his supergroup did T Rex's 1971 single 'Jeepster' - a song which featured on Bolan's number one second album 'Electric Warrior' and hit number two in the UK chart. This and several other of their epic cover tunes were played live at Rock in Rio in Brazil last year.