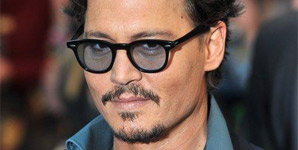 Interview with Johnny Depp for Pirates Of The Caribbean: On Stranger Tides 178th May 2011

In 2004, the first Pirates of the Caribbean movie earned Johnny Depp his first Oscar nomination, for playing the now-indelible movie icon Captain Jack Sparrow. And he's back for a fourth adventure in Pirates of the Caribbean: On Stranger Tides, playing a character he says he would happily carry on playing for the rest of his career.

Do you feel that Captain Jack is the role you were born to play?

Johnny Depp: Well, it gives me the opportunity to wear women's undergarments, which you don't get every day. Hey, when you get to take the chance, grab it! No, it's funny how the films and the character have been accepted. When we first started out on Pirates 1, it was very simple, like any other character: you just sort of grab bits and pieces and out comes this kind of weird little stew you've created. And then, boom! It's the first time I was ever offered the opportunity to find a couple more possibilities. It's just so much fun to get away with things you're not normally allowed to do. He's totally irreverent, played as absurd as you like.

Do you feel pressure to make Jack into a more standard hero?

Johnny Depp: The only responsibility, really, is to deliver something that's fresh each time, to entertain an audience, to try and make them laugh. That's really it. Already starting out as a pirate, you're not on good footing in terms of a positive influence. If a pirate is too good, he'd probably be thrown overboard. I think my only responsibility is to try and invent new situations and new bits and pieces that are entertaining.

And Keith Richards is back in this film.

Johnny Depp: It was very strange initially when the main ingredients came up, the idea of mixing Keith Richards and [cartoon skunk] Pepe LePew. I was a little worried about what Keith was going to think; I didn't fear Pepe LePew. But with Keith, for a good portion of the time I was spending with him, I was sponging as much as I possibly could to use for the character. And then when he found out what I'd been doing, it could have gone either way. But he was very nice about it, so to be able to bring him into the fold and do scenes with him was the most amazing time. It's just one of those moments when I think I'm really lucky to be here at this moment.

Will Captain Jack ever play the guitar?

Johnny Depp: The idea of playing a guitar anywhere near Keith Richards is crazy. It probably took me about 11 years before I could actually touch a guitar in his presence. And that was just to, like, pick it up and move it. There are some things you just don't do.

How hard is it to get back into Jack Sparrow's skin?

Johnny Depp: Well, all the characters I've played are relatively accessible. Some of them you have to kind of work up to, and other ones come a little bit easier. With Captain Jack, I've played him now four times. So yeah, he arrives pretty quickly. He arrives a little too quickly, in fact. You know, I'm dropping my kids off to school, and he'll show up.