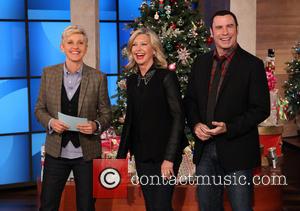 Ellen Degeneres has never been one to suffer fools gladly. When her recent chat show guest John Travolta tried to talk her through his hot chocolate obsession, guiding her through the various types of cocoa bean the world has to offer, she promptly cut him off, saying “I’m gonna interrupt just one second because this is incredibly boring.” Luckily, the Grease star was in on the joke and cracked a smile, as Ellen dissed his bizarre obsession.

In fact, Travolta was really on the show to promote the charity Christmas album that he is releasing with Olivia Newton-John. The album features guests such as James Taylor, Tony Bennett and Barbra Streisand. Oh… and Kenny G. “All the proceeds go to our charities. And they knew that so, once we told them that it was more impetus to help us,” Travolta explained. The moneys raised from the album’s sales will help the Jett Travolta Foundation, which the actor set up after the death of his son Jett. They will also help fund Olivia Newton John’s Cancer and Wellness Foundation.

The Jett Travolta Foundation aims to help people with autism and who suffer seizures, as they are “the least known areas of illnesses… and I feel bad that there’s so many people dealing with this and there are no answers for it.” However, he’s expanded the aims of the organization to include handicapped and underprivileged children.