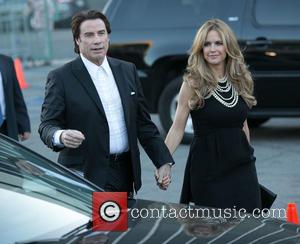 John Travolta proved he was a good sport on Sunday (22Feb15) as he returned to the Oscars stage and gamely poked fun at his embarrassing Idina Menzel slip-up at last year's (14) prizegiving.

The Pulp Fiction star infamously flubbed Let It Go singer Menzel's name, calling her "Adele Dazeem" as he introduced her Frozen performance a year ago, but he was happy to laugh off the gaffe as he made an appearance as a presenter at Los Angeles' Dolby Theatre this weekend (21-22Feb15).

Ceremony host Neil Patrick Harris set up the piece by quipping, "Benedict Cumberbatch: it's not only the most awesome name in showbusiness, it's also the sound you get when you ask John Travolta to pronounce Ben Affleck."

He then welcomed Menzel, who called on her "very dear friend" Glom Gazingo to join her on the podium as Travolta stepped out on stage.

Laughing, the actor said, "I deserve that", before giving his flubbed 2014 introduction another try as he correctly referred to the Broadway star as, "My darling, my beautiful, wickedly talented Idina Menzel..." - much to the singer/actress' delight.

The pair then teamed up to present the Best Original Song Oscar, which was won by John Legend and Common for Selma track Glory.