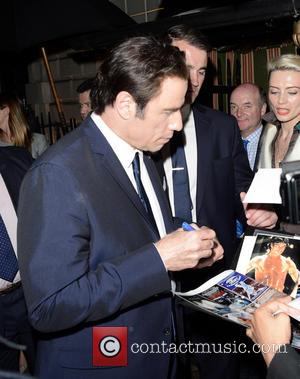 John Travolta and director Oliver Stone were the toast of the 48th Karlovy Vary International Film Festival in the Czech Republic as they were both honoured for their outstanding contribution to film.

The stars, along with Czech costume designer Theodor Pistek, were each handed the Crystal Globe Award for Outstanding Artistic Contribution to World Cinema at the festival's closing ceremony on Saturday (06Jul13).

Stone delivered an impassioned speech to the audience on accepting the prize in which he credited his inner turmoil and passion for self exploration with driving him to succeed.

He said, "I'm honoured by your recognition... Films continue to teach me and I hope to continue to make films. As you know from watching mine, there is still in me a tension that has haunted me all my life...

"These tensions will not allow me to let this award, or any honour... to stop me from looking for the next undiscovered land... In the spirit of this I will say to those of you out there, young dreamers, do not cease the exploration of yourselves."

Stone and Travolta, who unveiled his new thriller Killing Season at the festival, follow in the footsteps of stars including Dame Helen Mirren, Harvey Keitel and John Malkovich who have all been honoured with the accolade.