Actor John Stamos Is To Be Arraigned On A Dui Charge Following An Arrest Earlier This Year (Jun15). 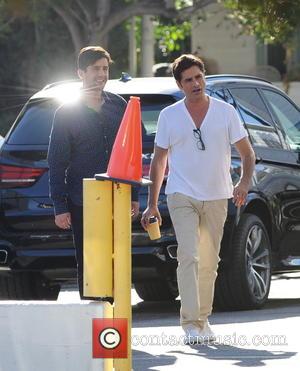 The Full House star was pulled over by police officers in Los Angeles after they received reports abut a vehicle being driven erratically. During the stop, the Beverly Hills Police Department officials determined Stamos needed medical attention, and transported him to a nearby hospital.

On Wednesday (14Oct15), Stamos was officially charged with a misdemeanour count of driving under influence of drugs and he is due in court on Friday (16Oct15). It is unclear what drugs were in Stamos' system at the time.

If convicted, he faces up to six months in jail.

Following his arrest, Stamos checked himself into a live-in treatment centre and subsequently revealed his mother's death led to the drama.

"I've had a rough year with my mum dying, so it all came to a head, and it was a turning point," he told Details magazine. "You either continue on that path - and some of it's fun, but a lot of it's not - or there's this other thing, this golden opportunity sitting there with all this work and all this goodwill that you have going for you."

The 52 year old insisted the events that led to the DUI are behind him, adding, "I feel better than I've felt in a decade. I swear to God I'm trying. It's not as much fun, but you have to be responsible. It's about discipline, which I lost for a while."

Meanwhile, Stamos' career is very much back on track - he has a new U.S. TV series, Grandfathered, and he's reteaming with many of his Full House castmates for the upcoming Fuller House.