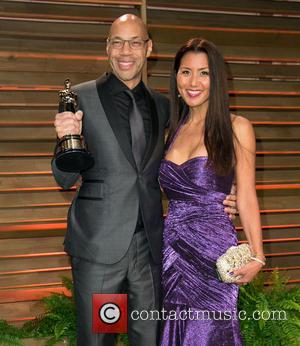 Oscar-winning 12 Years A Slave screenwriter John Ridley has brushed off rumours of a feud with Steve McQueen after he appeared to snub the movie's director during his acceptance speech.

The two men were sitting rows apart at the Dolby Theatre in Hollywood on Sunday (02Mar14) when Ridley claimed the prize for Adapted Screenplay for his script from the memoir of free man-turned-slave Solomon Northup.

However, the co-workers did not interact as Ridley made his way to the stage to collect the honour, and he failed to mention the filmmaker's name during his acceptance speech.

MCQueen seemed to do the same to Ridley at the end of Hollywood's biggest night, when he was feted for Best Picture, fuelling rumours of a fall out between the pair.

Reports suggest their relationship turned sour after Ridley rejected MCQueen's request for a shared screenwriting credit on 12 Years A Slave, but the writer has played down the claims, insisting the omission of the director's name in his Oscars speech was simply an oversight.

Speaking at the Vanity Fair Oscars afterparty, he told the New York Post's Page Six column, "I had less than two minutes to thank everybody, and I was so caught up in the emotion of the moment when I was onstage."

He added, "Listen, without Steve MCQueen I wouldn't have this Oscar tonight. I owe a lot to the genius of Steve MCQueen, and I am forever grateful to have had the chance to work with him...

"It was Steve's wife who found Solomon Northup's book (which inspired the film). It was a great honour (to work on the movie), but also a challenge because I wanted to be true to him, to turn Solomon's eloquent words into a screenplay."