The British-born comedian, who returns with his HBO show 'Last Week Tonight' at the weekend, joked that his green card status might not be enough to stop him being thrown out of America "like a tea bag".

With the return of his HBO political comedy show ‘Last Week Tonight’ set to return to the screen next week, British-born host John Oliver has expressed a degree of nervousness about having to inevitably taken on the new US president Donald Trump in the upcoming series.

As a green card-holder, Oliver echoed sentiments he made in a new Rolling Stone cover interview to Stephen Colbert when he made an appearance on ‘The Late Show’ on Tuesday (February 7th), saying that he’s no longer sure that he won’t be thrown out of the States “like a tea bag” if he pokes too much fun at Trump.

“The crazy thing is it's probably not gonna happen, but there is a non-zero chance of it happening now,” Oliver joked. “So yeah, I am slightly concerned. I have an American wife and American son now, but who knows what's enough? Having a green card used to be enough. But yet what we saw with that executive order on immigration, that debacle, things were not what they supposed to be.” 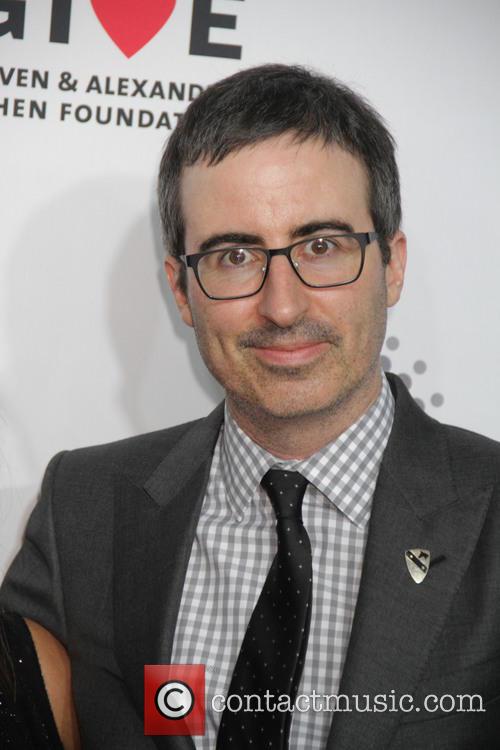 Having been off the air since Trump’s election back in November – which really does feel like a lifetime ago in terms of news – Oliver gave his thought on January 20th, which saw unrest as Trump was sworn in to the White House.

“Until Inauguration Day nothing was really happening. It was just being tied to a train track, watching the train coming. And then of course Inauguration Day is the train hitting you and you thinking, yep that felt pretty much how I thought it was going to feel.”

However, he urged people unhappy with Trump to change their tone from anger to something more productive in the long-term, if only to get themselves through it.

“We have a long way to go. It’s gonna be hard. It’s easy to be angry on adrenaline, but it is much, much harder when you’re tired. And this is going to be exhausting,” he said.

Although Trump’s first presidential orders are proving to be a rich vein of source material for comedians, Oliver has also said that he’s “very anxious” to prevent ‘Last Week Tonight’ from becoming “all Trump, all the time” when the fourth series begins on Sunday (February 12th).

The reason is for that is “both on a level of interest and on a level of what the human soul can sustain… He moves so fast that there's no real point in spending a month on something that he's said until you work out what the consequences of that are going to be.”