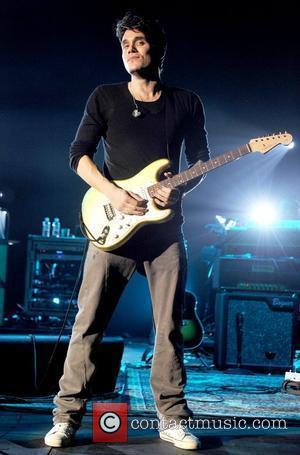 Representatives for the Gay and Lesbian Alliance Against Defamation (GLAAD) campaign group are calling on John Mayer to apologise for using a homophobic slur in his controversial Playboy magazine interview.
The Daughters singer has come under attack from critics since a no holds barred chat with the men's publication was released this week (begs08Feb10).
In the revealing article, Mayer used the 'N' word when talking about his African-American fanbase and admitted he'd happily pay for sex with ex-girlfriend Jessica Simpson.
Mayer has since expressed his sorrow on his Twitter.com blog for his offensive use of the 'N' word, but it's another headline-grabbing comment he made when referring to openly gay gossip blogger Perez Hilton which has irked the GLAAD activists.
Expressing his regret over a same-sex smooch with Hilton one New Year's Eve, Mayer said, "The only man I've kissed is Perez Hilton... I was dating Jessica (Simpson) at the time, and I remember seeing Perez Hilton flitting about this club and acting as though he had just invented homosexuality. All of a sudden I thought, I can outgay this guy right now. I grabbed him and gave him the dirtiest, tongue-iest kiss I have ever put on anybody - almost as if I hated f**s..."
GLAAD campaigners now want Mayer to say sorry to them for using the derogatory term.
In a post on their blog, GLAAD officials write, "Just as Mayer indicated in his (Twitter) apology, that he meant no offence in his use of the racist slur, we hope the intent behind his use of the F-word was not malicious. As a public figure with millions of fans, Mayer should be more cognisant of the impact his casual use of both slurs can have.
"Everyday, countless LGBT (lesbian, gay, bisexual and transgender) people including LGBT people of colour, are subjected to harassment, ridicule and even violence because of their sexual orientation or gender identity. More often than not, this verbal abuse includes the use of hurtful anti-gay and racist slurs such as the two that Mayer used. As a talented musician who has made comments supportive of the LGBT community in the past, we expect more from John Mayer and ask that he apologise."