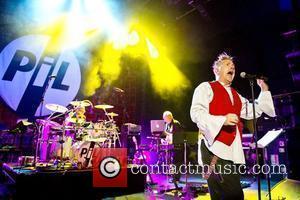 Punk legend John Lydon has furiously defended his decision to play a gig in Israel - insisting he will not be bullied into axing the show.
The rocker - known in his Sex Pistols heyday as Johnny Rotten - is taking his reformed band, Public Image Ltd. (PiL), to Tel Aviv to headline the Heineken Music Conference 2010 Festival in August (10).
The planned show has been met with criticism and hate mail from some fans who insist he should follow Elvis Costello's lead and boycott the country in protest over its policy towards Palestinians in the Gaza Strip.
Campaigners in Lydon's native Britain are even planning demonstrations outside a PiL concert in Leeds, England on Friday (23Jul10), but the punk star is adamant he won't cancel the Israel show - and he is livid at the controversy his decision has caused.
He tells British newspaper The Independent, "I really resent the presumption that I'm going there to play to right-wing Nazi jews. If Elvis-f**king-Costello wants to pull out of a gig in Israel because he's suddenly got this compassion for Palestinians, then good on him.
"But I have absolutely one rule, right? Until I see an Arab country, a Muslim country, with a democracy, I won't understand how anyone can have a problem with how they're treated."