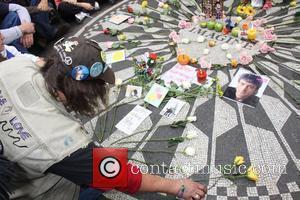 John Lennon's son SEAN has been blasted by fans of the late Beatles star for allowing Lady GaGa to play the musician's iconic piano.
Lennon and Yoko Ono's son posted a snap on Twitter.com of the Poker Face hitmaker playing the instrument, but he faced a barrage of criticism from fans of his father.
Sean defended his decision to allow the pop sensation to use the piano - insisting his followers shouldn't be "so judgemental".
In a series of posts on the microblogging site, he writes: "Pianos are meant to be played. Why is everyone so uptight?
"What should we do, lock it away in a dusty room? So judgemental... Come on, lighten up... life's too short, there're enough real problems in the world.
"Firstly, he gave that piano to my mother for her birthday, it is hers, secondly, he was not uptight the way you seem to be."
Gaga is a huge fan of the Beatles legend - she once confessed she would have fought Ono for Lennon's love if she was alive in the 1960s.