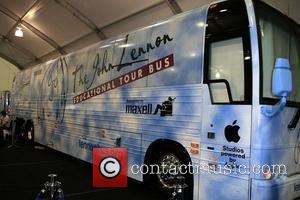 Picture: The unveiling of the All New John Lennon Educational Tour Bus at the 2008 International CES (Consumer Electronics Show) at the Las Vegas Convention Center...

John Lennon damaged a valuable HENRI MATISSE painting by using it as an ash tray during a wild party at the Playboy mansion in 1974, Hugh Hefner claims. The French artist's works have sold for up to $15 million (GBP8 million) at auction, but amazingly Hefner forgave the former beatle for stubbing out his cigarette on the priceless painting - because Lennon was one of his heroes. The 80-year-old says, "He was separated briefly from his wife Yoko Ono and was in a very bad mood. "He was drinking a great deal. He misbehaved a little bit and a couple of my friends took exception to it. "He put a cigarette out on a Matisse and one of my friends was going to kick his butt. But he'd been drinking. "He was under tremendous pressure, and Lennon was one of my heroes."