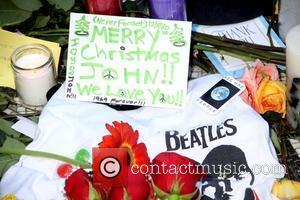 John Lennon's Imagine Peace Tower is lighting up the skies over Iceland again - to celebrate the former Beatles star's marriage to Yoko Ono.
The beam-of-light art installation on Vioey Island in Reykjavik was launched by Ono last year (10) to mark Lennon's birth and the anniversary of his death.
It was shut off in December (10), but the beam lit up the sky once again to commemorate what would have been Lennon and Ono's 42nd wedding anniversary on Sunday (20Mar11).
In a post on her Twitter.com page, Ono writes, "Imagine Peace Tower is lit to celebrate Spring and our wedding anniversary! Send yr wishes at http://imaginepeacetower.com."
The tribute tower can be viewed by fans as part of a live feed on the official Imagine Peace Tower website.