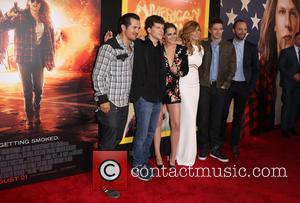 The Celebrity Apprentice star-turned-presidential hopeful is set to host the popular live show on Saturday (07Nov15), and his involvement has infuriated many critics.

Trump outraged the Latino community in June (15) when he made a series of controversial comments about Mexican immigrants in the U.S. during his campaign launch, and many celebrities including Ricky Martin, Pitbull and Eva Longoria have voiced their opinions about Trump's comments.

The Ice Age star has now spoken out, revealing he's upset by Trump's planned SNL appearance so soon after the property tycoon suggested many Mexicans in America are "rapists".

"I find it hurtful and insulting," he rages. "You're celebrating someone who has said some horrible things. I find it unacceptable. I will not watch... I won't watch SNL anymore."

"What he says doesn't even fall into the category of (politically correct)," he continues. "It is hate mongering. I hope what I do in my work is not denigrating or belittling. I mean, I'm all for freedom of speech, don't get me wrong. I believe in freedom of speech. This is different. If he had said those things about any other ethnic group, he would not be on SNL."

More than 522,000 of Trump's opponents have signed a petition launched by immigration reform group America's Voice, calling for SNL bosses to scrap his hosting appearance, and officials at Latino advocacy group Deport Racism have offered a $5,000 (GBP3,125) reward to anyone in the audience who yells out,'Trump is a racist,' during the live show.

"We're hoping the $5,000 will help people on set or in the studio audience find the bravery to speak out loudly and help focus the national conversation on that we need to deport racism, not people," organiser Santiago Cejudo says.