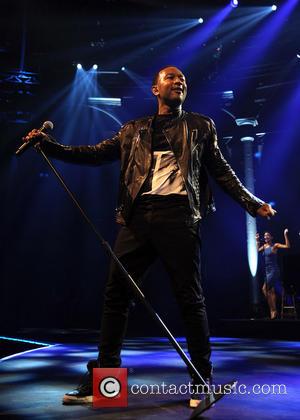 John Legend wanted to bring his career and love life "full circle" with his sexy new video for All Of Me because director Nabil was the same person to introduce the star to his new wife Chrissy Teigen.

The R&B singer wrote the ballad for the supermodel and recruited his then-fiancee to feature as his onscreen love interest when they shot the black and white promo in Italy, days before they wed last month (Sep13).

In the film, the couple appear semi-naked in bed and even strip off for a steamy shower scene, while also featuring some photos from their Lake Como nuptials - and Legend was more than happy to share the celebration of their love with fans.

During an appearance on U.S. talk show The View, he said, "We shot the video together in Italy. It's a crazy story. This friend of ours, Nabil, who is a great photographer and great director, we've worked with him for a long time, and he actually introduced us seven years ago when we first met and we were shooting a video together the first time we met, and Nabil directed it.

"And so we thought we should come full circle and shoot the video in the place we're getting married with the same director who introduced us years ago and it just turned out perfectly."