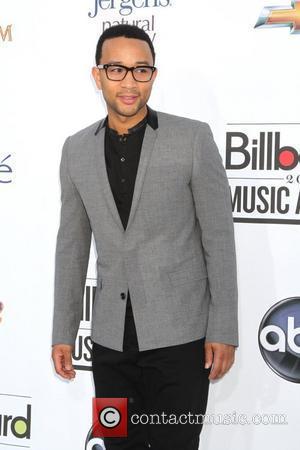 John Legend's model fiancee Chrissy Teigen has received death threats following her criticism of Chris Brown's performance at the 2012 Billboard Music Awards on Sunday (20May12).
The Kiss Kiss hitmaker dazzled fans with a show-stopping performance of his new single Turn Up The Music at the star-studded ceremony in Las Vegas, and the gig had viewers in awe as Bmx bike stunt troupes raced and spun on ramps on the stage behind him.
But some of Brown's pop peers were less than impressed by the high-frills show - Pink and her motocross star husband Carey Hart took to Twitter.com to call out Brown for focusing more on the visuals and less on the vocals.
And Teigen also voiced her thoughts, tweeting, "Why sing when you can dance?"
The subtle dig infuriated the 23 year old's fiercely loyal fans, and a handful of Brown's followers subsequently sent Teigen a series of violent messages.
Many of them have since been deleted, but Tmz.com has posted some of the taunts online.
One reads: "All you do is talk s**t, you need to be raped and murdered", while another disturbing post offered: "Your (sic) just mad because you were another Slut with a dress at the award show that nobody knows."
Another Brown fan called the model a "ditzy dumb a** tramp your mother should've aborted," while a fourth added, "you have the brain capacity of a turtle, just die".
Teigen has responded to the hurtful comments, writing, "Reallllly makes me sad that 99% of the most disturbing comments come from young girls. I'll end it there but it make (sic) me sad..."
And, explaining her decision to delete the vile correspondence, she added, "accounts deleted due to ohhhhh, i dunno. telling me i'm getting a bullet to my brain, asking for me to be raped and murdered...normal stuff.
"I have some screen caps (grabs). And I will do everything I can to make sure people know, internet or not, you Can'T say this s**t."