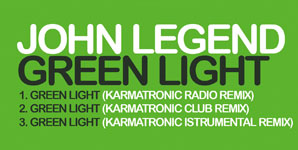 John Legend is about to release his third solo album 'Evolver' on Columbia and due to his continuing success is certainly attracting attention. The first single 'Green Light' to be released off the album is already proving successful. I love the single. It's more upbeat than Legends earlier stuff and certainly gets you moving. It features Andre 3000 from Outkast whose contribution is first class.

The Remix versions are different to the single. The karmatronic radio remix is more like the single and features the full chorus and verses with some snippets of Andre 3000. It's a dance version that doesn't seem too original to me but it should fit very well for the kids on the dance floor. Personally I prefer the karmatronic club remix and instrumental remix versions better as the music is bit more pulsating and deeper although it is a commercial dance single for sure.

I'm a huge fan of the single so I think it would take a pretty special alternative version to get me truly excited. The karmatronic versions are more for the commercial masses and I'm sure at many clubs on a Saturday night this single will go down well and I'm positive you'll hear this tune out, all good for John Legend of course.