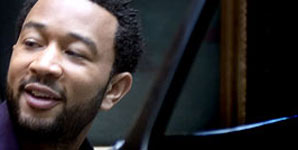 You have a 60's feel to some of the tracks on your new album. How would you describe the general sound of 'Once Again'?

I think it lends from a lot of genres. There's a 60's feel on some tracks also 70's soul, whist I have also added a modern edge on others, so there are sounds like nothing else that has come before. In general, the album is a blend of eras and that reflects my musical tastes. You'll hear me listening to The Beatles, I'll play a bit of Jay Z or Stevie Wonder next to The Killers.

The Killers have a great style
Yeah, I have been listening to their album a lot.

There are a few risqué tracks on 'Once Again', talk of threesomes and 'P.D.A' (We Just Don't Care)' is about making love in public places. Even the video for 'Save Room' has you hanging out with lots of different beautiful women, is this perhaps a glimpse into your new A-list lifestyle?
There are no threesomes on my album (laughs) believe me. Someone had thought 'Stereo' was about threesomes but it's not. My life is much simpler than that (laughs), I don't have several women waiting around for me. Not at all. The video aside, 'P.D.A' is a song about when you really love somebody, you just can't resist wanting to show that out in public sometimes.

The voyeurs amongst us will love that! Anyway, what was your musical upbringing like in Ohio?
I was around a lot of gospel as a kid.

That was through church?
Yes, through my parents and through my church. Just being in a family where that was a big thing.

A lot of Black Americans have similar upbringings but it never seems like a lot of them go back to church?
I don't go to church a lot. I go occasionally, usually when I go to see my parents. I am not devoutly practicing religion at this point but it is still apart of my heritage and I think a part of my musical background too.

It is Black History Month, which person of colour past or present do you hold in high regard?
There are so many. Obviously Martin Luther King was very important especially in the States but even around the world as a symbol for non-violent protest, he was an effective leader and eloquent too. I do however laugh at the notion of doing a Black history month. I mean, Black people have been so important to the history of the world, so it is silly to single out one month. We should be acknowledging history all of the time.

'Coming Home' explores a soldier fighting for his country overseas and his uncertainty. What's your view of artists using their spotlight to voice political opinions?
The song to me has a political backdrop, but in a lot of ways it is just about an emotional young man who might die any day and him wanting to be with his family. I was trying to connect to the human side of what war is. I don't think it's an artists responsibility to be political all the time, I think your first responsibility as an artist is to make music that people will listen to and enjoy, however I think that when you are able to say something that is moving and put it in a great song then that is even better.

The anthem of a recent break up for me was your smash hit 'Ordinary People' from your last album 'Get Lifted'. It was like therapy for just the price of a CD?
(laughs) That was cheap therapy. I have to charge more for these albums.

Based on the fact you choose to usually write about domestic issues, can I assume most are autobiographical?
No you can't assume that. There are autobiographical elements to the albums and when I write I always reference my own life as well as other things, so I'm just like any novelist or any fiction writer who tells stories. Sometimes you use your own life as an example but a lot of the time you reserve the right to make things up or draw from other people's lives, things you have read, or things you have seen in movies.

I was delighted to see that you have a track entitled 'Maxine', until that is, I discovered she was a two timing cheat. How could you tarnish my name like this?
(laughs) The first line I had was 'she may not be you, but she looks just like you' so I started to develop a whole idea around it. The concept was loosely based on a song by Nancy Wilson called 'Guess Who I Saw Today'. Nancy Wilson is singing to her lover saying that she saw a beautiful couple at this bar and you wouldn't believe who it was it was you, with someone else, and so that was the basic concept of 'Maxine'. When I was writing with the guys they said we should call her name and kind of plead with her. So we started throwing out names to see what sounded the best and Maxine just sounded so good.

Sounded like a good cheat name huh?
We wanted something that sounded quaint a bit vintage, because not many young girls are named Maxine. Sorry (laughs).