We all know the soundtrack, those simple few chords that have backed many great sporting moment have become synonymous in the sporting world. Now, after 31 years since it's initial release, the true story of two very different runners in the 1924 Paris Olympics will be released once again, this time in full digitalised glory, as Chariots of Fire is set to be released once more as part of the London 2012 Festival.

By Paul Brenner
Extraordinary
"Caesar! Beware of Brutus. Take heed of Cassius. Come not near Casca. Have an eye to Cinna. Trust not Trebonius. Mark not well Metellus Cimber. Decius Brutus loves thee not. Thou hast wronged Caius Ligarius. There is but one mind in all these men and it is bent against Caesar. If thou beest not immortal, look about you. Security gives way to conspiracy."

By Christopher Null
Excellent
In Hollywood, you just can't make a movie like Shine. Put simply, it is just not allowed.

By Christopher Null
Good
Laurence Olivier's Richard III is one of the stagiest versions of Shakespeare you'll find on film, and it's also his least faithful work, chopping and editing the Bard's play willy-nilly. I'm no Shakespeare expert, but even I can spot the hatchet work here. (For the uninitated, Richard III follows the waning days of the War of the Roses, with Richard III (Olivier) taking on big brother Edward (Cedric Hardwicke) in a bid for the throne. Deception, murder, and betrayal rule the day until the outcome is decided.)

The Portrait Of A Lady Review

By Christopher Null
Very Good
Jesus, I didn't realize when I went to the movies this morning I was going to have to think!

Continue reading: The Portrait Of A Lady Review 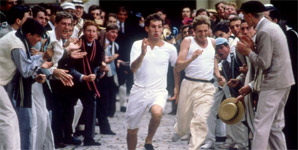 We all know the soundtrack, those simple few chords that have backed many great sporting...

In Hollywood, you just can't make a movie like Shine. Put simply, it is...