John Galliano believes being invited to design Kate Moss' wedding dress was ''creative rehab'' and helped turn his life around. 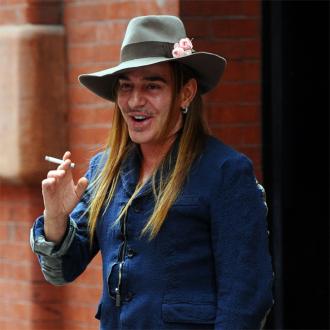 The scorned designer - whose career was shattered after he was caught on camera in an anti-Semitic rant in 2011- realised he might be able to make up for his mistakes and rebuild his life when the British supermodel reached out to him a few weeks into his recovery from alcohol and prescription pill addictions.

Galliano, 52, was stunned Kate still wanted him to create her bridal gown for her wedding to Jamie Hince, an idea they had discussed before he was fired from Christian Dior.

In his first ever official interview since his dismissal, he told Vanity Fair magazine: ''Creating Kate's wedding dress saved me personally because it was my creative rehab. She dared me to be me again.''

Kate - who has fronted campaigns for Dior in the past - donned the ''gorgeous'' 1920s style dress for her wedding at her countryside mansion in July 2011, and revealed she found the garment symbolic.

Describing its decorative ''gold sequins in the shape of the phoenix'', she explained it was ''as if he was saying he would rise from this.''

The model is no stranger to media scandals herself, and felt it was important to show her support for her friend.

She added to Vanity Fair: ''When my dad gave his speech he thanked everyone and then he referred to the genius of Galliano, who made his daughter's dress.

''Everyone stood up and gave John a standing ovation. It was the most moving thing, because suddenly John realized he wasn't on his own.''

Galliano also talks candidly about his battle with addiction in the interview, claiming the shocking substance-fuelled incident - which made him violently sick when he watched it back - was a complete eye-opener.

He concluded: ''It sounds a bit bizarre, but I am so grateful for what did happen. I have learned so much about myself.

''I have re-discovered that little boy who had the hunger to create, which I think I had lost. I am alive.''