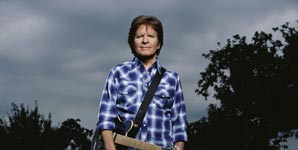 Artist: John Fogerty
Song title: Don't You Wish It Was True and Summer of Love

John Fogerty reclaims his rightful place among America's most iconic and revered artists with the forthcoming Revival, due October 2nd.
Fogerty's contribution to popular culture cannot be overstated; his songs have become part of rock's DNA, the very building blocks upon which much of American rock and roll has been built. As the album title tantalizingly suggests, Revival represents a renewed musical spirit and heart from Fogerty that incorporates all the best elements of a career that has resonated deeply with generations of music fans and the thousands of artists that he has influenced.
"It just seemed like all the records I have made since Creedence Clearwater Revival have all been sort of pushed off center," he says. "I felt like I was dancing around the outskirts of what is my true center. With this album, I really wanted to stay on the mark, right in the middle, right where rock 'n' roll is. I wanted this one to be easier, a lot more fun than some of the past records have been."

That renewed sense of joy shines through on the self-produced Revival. The wistful, infectious opening track "Don't You Wish It Was True" instantly puts a smile on the listener's face. "Gunslinger"'s cinematic western-theme evokes vintage-era Creedence, while on the deliciously swampy "Creedence Song," Fogerty correctly and humorously assesses "You can't go wrong/if you play a little bit of that Creedence song." His love of classic Sun Records-era rockabilly permeates "It Ain't Right," one of many tunes on the album that allows Fogerty, whom Rolling Stone named one of the greatest guitarists of all time, to show off his blistering guitar work. "The River is Waiting" is a gorgeous, hymn-like spiritual that features well-known vocal trio, The Waters on backup vocals. A trenchant observer of the world's troubles, Fogerty weighs in on the current administration with the rollicking, biting "Long Dark Night" and the 'mission critical' statement of "I Can't Take It No More" with its unmistakable admonition ".another fortunate son."

John Fogerty, Dont You Wish It...