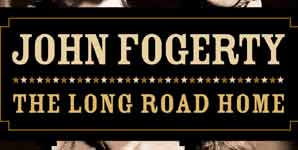 Los Angeles, CA – September 9, 2005 – After more than three decades, John Fogerty, one of the most important songwriters of all time, has returned to Fantasy Records. Fogerty's infamous relationship with the label, now part of the Concord Music Group, led him to suffer through years of bitter disputes and lawsuits, making this startling announcement perhaps one of the most unlikely and unexpected reunions in music industry history.

As lead singer and songwriter for the immensely influential Creedence Clearwater Revival, Fogerty scored nine Top 10 singles from 1969-72 (Creedence out-sold The Beatles in 1969) released a slew of seminal hits that would become great American anthems synonymous with a generation, including "Fortunate Son," "Proud Mary," "Bad Moon Rising," "Born On The Bayou," and "Who'll Stop the Rain." His chart-topping solo recordings have sold millions of copies worldwide, while his live performances have received critical acclaim. Fogerty has been inducted into both the Rock and Roll Hall of Fame and the Songwriters Hall of Fame.

Fantasy will celebrate the return of Fogerty with the November 1 release of The Long Road Home – The Ultimate John Fogerty • Creedence Collection, an aptly titled disc that honors the icon's musical journey from his early career to today. This comprehensive retrospective features, for the first time ever, all of the songwriter's most poignant and enduring hits. Included are seminal tracks from the Creedence catalog, along with the crÃ¨me de la crÃ¨me of his solo work, including "Centerfield," "DÃ©jÃ  Vu (All Over Again)," and "Hot Rod Heart" from the GRAMMYÂ® Award-winning CD Blue Moon Swamp. Also on the disc are four new tracks recorded live by Fogerty during his 2005 tour of the United States: "Hey Tonight," "Bootleg," "Keep on Chooglin'," and a blistering rendition of "Fortunate Son."

The Concord Music Group and Fantasy have great admiration for Fogerty's extraordinary talents and have embraced their relationship with him. Together, they are working on several new releases, including a live DVD, to be taped September 15 at the Wiltern Theater in Los Angeles, for an early 2006 release. Other projects are presently in the early stages of development.

"I'm very happy to be back in touch with a part of myself," says Fogerty of the return home to Fantasy. "It's surreal. For 35 years, I never thought I'd be reunited with the music I wrote during the Creedence Clearwater Revival years. After meeting with Norman Lear, Hal Gaba, and Glen Barros [President of Concord], I'm happy to say that the new Fantasy is very enthusiastic about my body of work. All the people there have been delightful. They are honoring my songs that hold an important place in the history of American music. And, they are honoring me."

Concord Music Group co-owner, the legendary television and movie producer Norman Lear, is equally enthusiastic about the signing: "It's a happy coincidence that when we bought the Fantasy catalog we were also able to sign one of the most relevant and talented singer/songwriters of our generation. We're all enormous fans of his music. He's a big hero here."
In fact, Fogerty and his wife Julie made contact with senior executives at Concord when the company was still in negotiations to purchase Fantasy. "We heard rumors over the years that Fantasy was on the market, but nothing materialized," Fogerty says. "About a year ago we heard the same rumor again, so Julie and I met with Norman and Hal, and other people at Concord just to get acquainted. At our first meeting, they expressed great respect and appreciation. When they finally acquired Fantasy, we figured the time was right to see if we could work together."

Concord Music Group president Glen Barros adds, "When we completed the deal to buy Fantasy, talks with John began in earnest. We were all aware that there had been much bitterness over the years between John and the label. We wanted to build a bridge back to him so that we could reconnect him to the Creedence catalog. We wanted to celebrate his work with the band, and move forward with him so that he could create new music. We're delighted that John is back with Fantasy, and we have tremendous enthusiasm for our long-term plans."

In the meantime, Fogerty is excited about The Long Road Home, whose title, he notes, is apropos. "I've always wanted to create a greatest hits collection that represented my entire career, but it was always painfully impossible to do so," he says. "Now I can combine the Creedence songs, all of which I wrote, with my solo material. It's great that I can finally document the various changes I've gone through musically over the years without having to follow any artificial lines."

John Fogerty, Dont You Wish It...