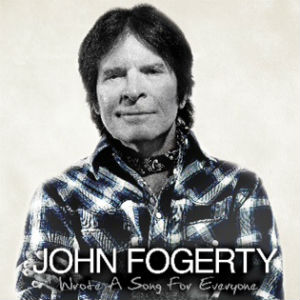 John Fogerty's new album WROTE A SONG FOR EVERYONE continues to build critical momentum, receiving one stellar review after another.  The media is hailing the FOGERTY-produced album--which marks the Grammy Award-winning Rock and Roll Hall of Fame inductee's highest-debuting album (#3 on Billboard's Top 200 Album chart) of his career (including Creedence Clearwater Revival releases)--as one of his finest works.

A celebration of FOGERTY's iconic songbook, the album is a collection of 14 songs: 12 classics and deep tracks (Creedence Clearwater Revival and solo material) from his remarkable canon of hits recorded in collaboration with today's biggest superstars from the country, pop and rock worlds, plus two brand new solo songs.

Fogerty's music is getting a wide array of radio airplay.  Every song on the album was heard on-air from its very first week of availability at radio-a rarity in today's radio paradigm.  Fogerty participated in an hour long iheartradio concert which was simulcast by Q104.3 in New York City and promoted across 133 stations across the US, an unprecedented partnership.  His entire release night concert in Los Angeles was simulcast by KLOS and telecast by AXS-TV.  Multiple SiriusXM channels have featured interview and music content with John about Wrote a Song for Everyone.  Fogerty was featured in an extended interview on Marc Maron's WTF podcast.  The single "Mystic Highway" is getting airplay across formats and has become the #1 Most Requested Song at tastemaker station KCSN in Los Angeles.  Album cut "Fortunate Son" with guest artists Foo Fighters is currently up to #4 on the Classic Rock singles chart.

On the concert front, JOHN FOGERTY-one of rock's most important artists and a national treasure who's sold over 100 million albums--will be rockin' all over the world in 2013 and 2014. Additional tour dates were announced including a three night stint at New York's Beacon Theater in November.  More dates to come soon.  In addition, FOGERTY has two festival sit-ins with Widespread Panic and Zac Brown Band.