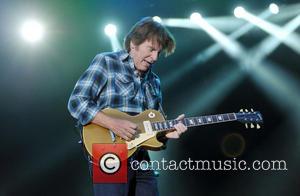 Veteran rocker John Fogerty has responded to critics who complained when his hit Fortunate Son was performed by Bruce Springsteen during a Veterans Day concert in Washington, D.C. on Tuesday (11Nov14).

Springsteen played the Creedence Clearwater Revival song, which is deemed an anti-war anthem, at the Concert for Valor, alongside Foo Fighters' Dave Grohl and country singer Zak Brown.

The trio came under fire for the song choice because nearly 12,000 of those in attendance at the military remembrance event were members of the U.S. armed forces.

However, Fogerty, who served in the U.S. military in the 1960s, is adamant the song has been "misinterpreted" and he has nothing but respect for servicemen and women.

In a statement, he says, "Fortunate Son is a song I wrote during the Vietnam War over 45 years ago. As an American and a songwriter, I am proud that the song still has resonance. I do believe that its meaning gets misinterpreted and even usurped by various factions wishing to make their own case. What a great country we have that a song like this can be performed in a setting like Concert for Valor.

"Years ago, an ultraconservative administration tried to paint anyone who questioned its policies as 'un-American'. That same administration shamefully ignored and mistreated the soldiers returning from Vietnam. As a man who was drafted and served his country during those times, I have ultimate respect for the men and women who protect us today and demand that they receive the respect that they deserve."