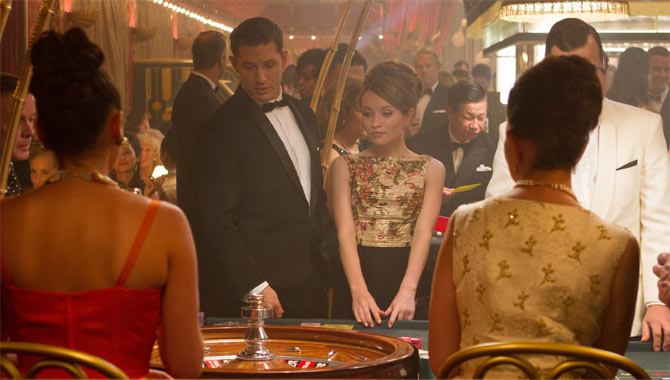 Throughout the 1950s and 1960s, London was at the mercy of the terrifying Kray twins (Tom Hardy). Reggie Kray was forced to spend most of his life holding back his identical twin brother, Ronnie, who suffered from paranoid schizophrenia. As acclaimed night club owners and feared gangsters, the two twins were seen to own London, and lived a life of glitz and glamour, as well as blood and brutality. That is, until Detective Superintendent Leonard "Nipper" Read (Christopher Eccleston) took the task of bringing two of the most powerful and dangerous criminals in the city's history to justice, by any means necessary.

Jane Hayes has, what some might say, an unhealthy obsession with Jane Austen's novels and all things from the Regency era. She's infatuated with Mr. Darcy from 'Pride and Prejudice' - of whom she has a cardboard cut-out portrayed by Colin Firth from the 1995 Emmy winning BBC series - and has filled her bedroom with all manner of Austen-themed memorabilia. After discovering an ultimate Austen experience in England, she puts all her life savings into making the trip there, immersing herself completely in the Regency style excursion and finding her Mr. Darcy. However, it soon becomes clear that living without modern amenities is almost unthinkable and the paradise she imagined is far from bliss. Although she starts to contemplate that she may have wasted all her life savings, she does meet a potential love interest, though he may not be what she was looking for.

Tim Lake is 21-years-old and not exactly what you call an expert in the art of getting girlfriends. However, all that's about to change when his father lets him in on an incredible secret the day after a shambolic New Year party; all the men in their family can travel back in time and change things that have happened in their lives. Given that he is so clumsy around beautiful women, Tim uses this to his advantage, giving himself a second chance on first impressions. He manages to woo a beautiful girl named Mary with his advances, having honed them to perfection, but little does he realise just how dangerous his actions are. When he accidentally slips up during one time warp incident, he discovers that Mary has never met him before and that several months of romance have completely vanished. He must try and win her back once again, but accept that he cannot avoid the problems life and love inevitably bring - no matter how many times he tries.

Gary King is a 40-year-old still living in his teens and who can't wait to gather up his four friends from his teenage years to complete a pub crawl that they failed 20 years ago as kids in their hometown of Newton Haven. Unfortunately for him, his now corporate, higher-living friends are reluctant to agree though with much pressure from Gary, they eventually relent. However, things aren't exactly as they remember; the townsfolk are acting oddly and they are about to embark on a mission to rescue their childhood home from a threat of galactic proportions. But will they manage to complete their drinking quest and reach 'The World's End' pub as well as save the world from certain destruction?