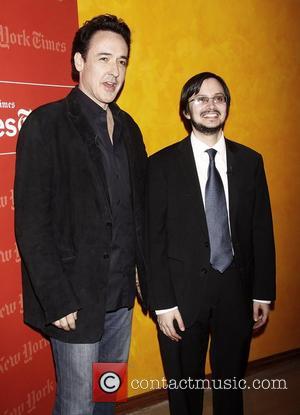 John Cusack has seen almost everything during his 30 years working in Hollywood, but the actor says even he was shocked by the adrenaline that kicked in whilst filming scenes for his forthcoming Edgar Allen Poe movie 'The Raven'. The film, which opens on Friday (April 27, 2012), sees Poe attempt to track down a madman who has begun committing horrific murders inspired by his gothic literary works.
Speaking to the New York Daily News about his time shooting the movie, Cusack said it made him remember why he loves acting so much. Recalling one moment, the 'High Fidelity' star said he found himself charging through an Eastern European graveyard on horseback, adding, "I'm on a horse in Serbia playing Edgar Allan Poe in the fog, riding through the underworld.This is pretty cool". Director James MCTeigue showers the actor with praise for his horse-riding ability, saying, "John can ride a horse, so that's great.The amount of time I've stood on sets with actors and they've said, 'I can ride a horse,' and you get them there and it's like, 'no, you can't ride a horse.' John can. With the action, you always buy into the action more if you see it's the actor in the frame". Also starring Luke Evans and Alice Eve, the movie is set during the last five days of Allen Poe's life, before he was mysteriously found dead near a park bench in Baltimore.
Early reaction to the film has been mixed, though the Guardian's critic Peter Bradshaw offered, "Stephen King's Misery and Updike's Bech Noir spring to mind, and it's a nice touch to give Baltimore a serial killer over a century before Dr Hannibal Lecter was employed by the Johns Hopkins Medical Centre in that city".