John Cusack Joined By Feathered Friend At 'The Raven' Premiere 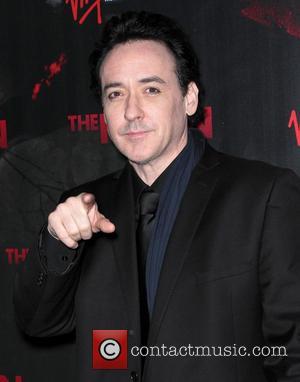 John Cusack and co-star Alice Eve attended the premiere of their new movie 'The Raven' in Los Angeles on Monday (April 23, 2012), though it was another cast-member who stole the show. A real Raven bird flew down the red-carpet, settling on Cusack's arm, much to the delight of the waiting press pack.
In the fashion stakes, it was Eve who took home the plaudits, wearing a black dress with bright blue heels and deep red lipstick. Cusack - who plays the role of Edgar Allan Poe in the fictional movie - wore an all-black outfit with navy tie. While the New York premiere of the movie attracted a whole host of famous faces last week, the Los Angeles screening also pulled in its fair share of celebrities. Model Audrina Patridge stepped out with Krysten Ritter, while Allison Lohman and Bonnie Sommerville also walked the red-carpet. The Raven is a fictionalized account of the last days of Edgar Allan Poe's life, in which he pursues a serial killer whose murders mirror those in the writer's books. The movie hits cinemas in the U.S. on Friday (April 27, 2012).
John Cusack has no less than five movies set for release in 2012, and is rumored to be starting work on the drama 'The Butler', about The White House's butler Eugene Allen, who served eight American presidents over three decades.