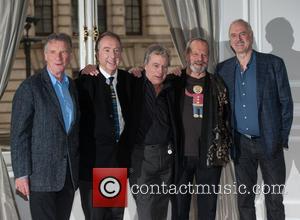 Funnyman John Cleese is unable to perform his legendary 'silly walks' at the upcoming Monty Python reunion show because hip and knee replacement surgery has left him unable to contort his legs.

The comedy troupe - Cleese, Terry Gilliam, Eric Idle, Terry Jones and Michael Palin - held a press conference in London on Thursday (21Nov13) to confirm they are getting back together to stage a show at the city's O2 Arena in July (14).

The Meaning of Life stars said the production will contain some new material alongside their classic sketches, but fans' favourite skit, The Ministry of Silly Walks, will not be featured as its star Cleese would struggle with it.

The routine features Cleese performing a series of bizarre methods of walking, and the British star is adamant surgery to his hip and knee have left him unable to repeat the famous sketch.

He told reporters at the conference, "That's impossible now because I have an artificial knee and an artificial hip, so there's no chance of that now."

The five writers last worked together on 1983 film Monty Python's The Meaning of Life, which also starred Graham Chapman, who died from cancer in 1989.

Idle joked that they decided it was time for them to revisit Monty Python for one last time, saying, "If we left it too long it would be too late. We don't have that long, do we?... We just thought it would be fun to do one (show) and see if we are still funny, and to do the O2 and see if we can fill it."

It will be filmed for a later Dvd release, and Palin says they might even consider a European tour if the show is a success.