WWE superstar John Cena and a host of other wrestlers are going to star in an animated film with Scooby Doo in a new collaboration between WWE Studios and Warner Bros. 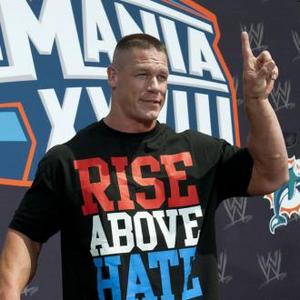 WWE superstar John Cena is teaming up with Scooby Doo for a new animated film.

The grappling icon will appear in a new joint project between WWE Studios and Warner Bros. which will see the cartoon dog and the Mystery Incorporated gang have to solve a puzzling problem at Wrestlemania.

As well as Cena, the movie will feature a host of the wrestling company's superstars turned into animated characters, including Triple H, Kane, The Miz, Brodus Clay, Santino Marella, Sin Cara and Diva AJ.

WWE Chairman and CEO Vince Mcmahon will also become a cartoon version of himself and will lend his voice to the project.

WWE Studios President Michael Luisi said: ''We are excited to partner with Warner Bros. on this wonderful animated film. Kids and adults are going to enjoy seeing their favourite WWE Superstars in animated form join forces with an icon like Scooby-Doo to solve a mystery at the biggest pop-culture event of the year - WrestleMania.''

It is not yet known if the film will get a theatrical release and it is scheduled to be available on Blu-ray, DVD, VOD and digital download in 2014.

Jeff Brown, Executive Vice President and General Manager, TV, Warner Home Video, said: ''Warner Bros. is thrilled to get into The Ring with WWE Studios to bring fans an unprecedented animated adventure. We're excited to leverage the WWE's family-friendly brand and passionate fan base and integrate some of the most popular WWE Superstars and Divas within the Scooby-Doo gang.''