'Halloween' creator John Carpenter told the director of this year's sequel to "make it relentless".

Michael Myers is one of the most iconic horror figures to have ever come from the movie genre. Having appeared in countless 'Halloween' films following the original, his scares soon turned to something a little less terrifying, and before long he would become the butt of many jokes thanks to sequels that failed to hit the mark. Fortunately, series creator John Carpenter is allowing history to be rewritten. 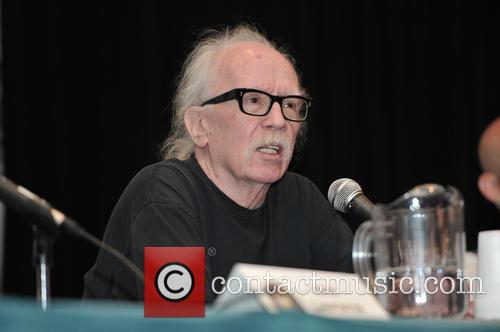 John Carpenter had some words of wisdom for David Gordon Green

This year, Myers will make his way to the big screen once more, with original 'final girl' Laurie Strode also making her comeback. Jamie Lee Curtis is returning to the role of the lone survivor, whilst original Myers performer Nick Castle will also be taking part in some of the killer's latest scenes, alongside James Jude Courtney.

Always something of a cult figure, film director John Carpenter's impact is frequently underestimated. One of the pivotal figures in transforming the horror genre from its Gothic high camp of the early 1970's to the visceral roller-coaster of today, he engineered a major turning point in 1978 with Halloween, in which the maniac serial killer Michael Myers set about his teenage prey with psychotic abandon, the premise a neat bridge between the voyeuristic debauchery of video nasties such as I Spit On Your Grave and the Little Green Men creature features of his youth.

Operating on low budgets off the Hollywood grid necessitated resourceful approaches to the director's modus operandi, with one of the most notable cost-cutting adaptations being self-composed and produced scores and incidental pieces. Born into a musical family - his father was a violinist and lecturer - the Halloween soundtrack was composed on a Moog modular synthesiser, a collage of jarring and dissonant sounds which perfectly complemented it's anti-hero's silent menace.

His occasionally schlocky celluloid output has received a mixed public and critical reception since, but Carpenter's idiosyncratic approach to sound as a weapon - think Giorgio Moroder as an axe murderer - has continued to be a highly influential feature of his work. After Boards of Canada cited the minimalist analogue textures of the VHS creepies this inspired to have broadly informed much of 2013's Tomorrow Harvest, the following year the New Yorker released his début collection Lost Themes - a work completed in collaboration with his son Cody - to the sort of acclaim some of his cinematic flops were never afforded.

Five TV series and a helluva lot of movies are heading for the trash pile in the new year, as Netflix decides against renewing a number of contracts

No longer will you be able to see such instant classics as Foxy Brown, Killer Klowns From Outer Space, Stop! Or My Mum Will Shoot or Troll II on Netflix by 4 January at the latest, as the popular streaming service looks to let some of it's rooster dry up as a number of licensing contracts run out.

Hey Netflix! Maybe if you changed your interface then we wouldn't have to wait until now to watch Troll II

On a serious note, there are actually some notable casualties in the content shake up, with some genuinely great films heading for the scrap heap. Eternal Sunshine of the Spotless Mind, Being John Malkovich and Desperado are three cult classics that must still generate a great deal of interest in the site. Meanwhile Oscar-winners like As Good As It Gets, Born on the Fourth of July and the original True Grit will probably see a renewed interest on torrent sites and unlicensed streaming sites. As for television, a number of seasons of Saturday Night Live and all of Mr Bean will also be heading for the scrap heap.

Continue reading: Netflix To Erase A Huge Chunk Of It's Library In The New Year

Kristen is a young and beautiful girl who's just been institutionalised in a hospital for the mentally unstable. It's 1960 and she has no idea of why she's become a patient, her memory of life before whatever drove her to be seen as unbalanced totally escapes her and the doctors don't appear to be shedding much light on her situation either.