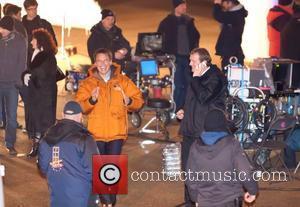 Doctor Who star John Barrowman was made a real-life doctor at a special ceremony in his native Glasgow, Scotland on Tuesday (05Jul11).
The actor, best known for his role as Captain Jack Harkness in the cult TV series, accepted the Doctor of Drama honorary degree from the Royal Scottish Academy of Music and Drama (Rsamd).
Posing in a traditional Scottish kilt with his honour, Barrowman said, "21 years ago, I actually did my first audition for Anything Goes here opposite Elaine Paige, got the job and wasn't able to finish my degree. And here I am, 21 years later, I've finally got it.
"You can call me Doctor now. I'm glad I'm back up in Scotland and able to celebrate in full highland dress."