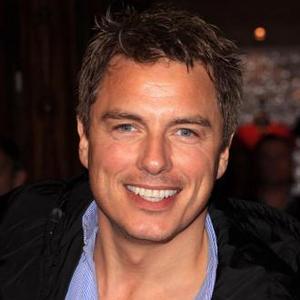 John Barrowman has been named Wizard Jeans Rear Of The Year.

The 'Torchwood' actor and 'Coronation Street' actress Shobna Gulati were deemed to have the best bottoms in showbusiness by the clothing company and both are thrilled their toned posterior's have been awarded the honour.

John, 45, said: ''With tush tightly toned, cheeks firmly clenched and a big smile on my face, I'm thrilled to be awarded the accolade.''

Shobna added: ''I am really honoured and flattered to be a winner of this year's competition and for my bum to be etched into the history of the award's alumni - a list which includes so many other distinguished bottoms.

She added: ''Shobna's slim but womanly silhouette is a fine Example of the happy, healthy female form for 2012 and John's rear is clearly admired on an international basis, judging by the number of fans who voted for him. No Doubt his dancing prowess helps to keep him in tremendous shape.''