The funny thing is Scott Gill wasn't fazed in the slightest.

When joining a live Facebook chat with a celebrity, you're going in expecting to hear a little bit about their personal life. You're probably not going in to catch a glimpse of their partner's privates, though fans were treated to that extra when they tuned in to talk with John Barrowman. 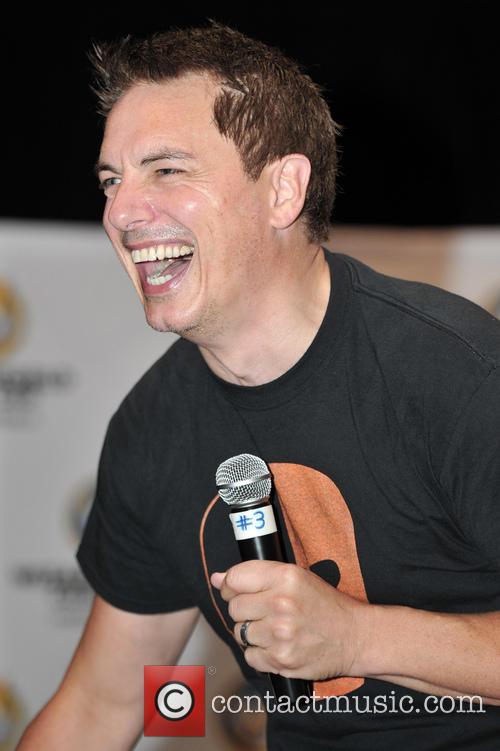 While 'Torchwood' star John Barrowman talked about the weather in Palm Springs, California, enjoying the sunshine in his hot tub in his backyard, his husband Scott Gill saunters into the background about to climb into the tub. Though there are no bathing shorts to be seen. 'Ooh Scott, oh my God!' John exclaimed, turning the camera away quickly but not quickly enough. 'Did they just-? I'm live video! I can't believe I pro- everyone probably just saw you naked!' The spluttering actor turns the camera back on himself with a sheepish grin. 'Did you all see him naked?'

It's safe to say that everyone watching did, indeed, get a glimpse of Scott's member, though not everyone complained. John then invited him over into the conversation, explaining that he is amidst a live chat with all his Facebook followers. 'It's live on Facebook... with everybody. All the fans, there's thousands of 'em', he says. The nonchalant Scott said hello as John continued to explain that there was 4,000 followers watching at that moment.

The couple seemed unperturbed, however, and Scott is later seen staring at the horizon with his back to the camera, the water only just screening his rear. 'You're gonna see his bum', John tells his fans with a cheeky grin. 'Scott, jump up!' He turns around quizzically and John was this time fast enough to turn his camera away. 'Not forward!' He added. Scott does indeed later expose his butt as he climbs out of the tub. Naughty John. 'I have to be careful because Scott forgets that it's a camera and he'll stand up and... wang-a-dang-dang dingy-dang-dang', he says.

John did take to Facebook again later to talk about what happened, though he was less than apologetic. 'Well, I wondered what the fuss was all about but, yep! Ya saw it! Now you know why we big boys stick together! Yeah, Scott accidentally bared it all on Facebook and online so there ya go, now you've seen it', he confirmed in one video. He went on to express his complete chill of the situation in another video. 'In no way are we embarrassed about what happened in the jacuzzi and if anybody else is like offended or whatever, the human form and the body no matter what size you are, the nude body, there's nothing wrong with it', he said.

As for Scott himself, when John reminded him about the frankly hilarious incident while watching 'Game Of Thrones', the event barely seemed to have registered on his radar. It's safe to say viewers aren't likely to forget about it as easily though.