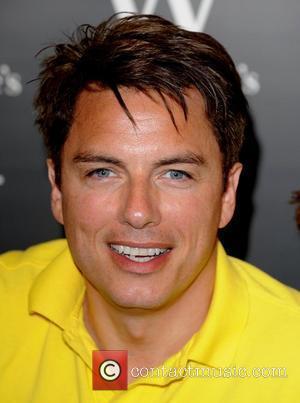 Picture: John Barrowman signing copies of his autobiography 'Anything Goes: The Autobiography' at Waterstones in Oxford Street London, England - 11.02.08

British actor John Barrowman was once courted by Italian designer VALENTINO GARAVANI - but dismissed the fashion legend's advances because he felt like a "trophy". The openly gay Torchwood star caught the eye of the flamboyant designer after appearing in a hit London show. The 75-year-old haute couturier allegedly spent huge amounts of cash on lavish gifts and holidays to woo the Scottish-born entertainer - even sending him a treasured 1959 Rolex. But Barrowman, 40, who married longterm partner Scott Gill in December 2006, resisted the style guru's charms and sold the watch at auction. He tells British magazine Heat, "Valentino courted me for quite a while. I wanted to be his friend but I don't think he wanted friendship. They (famous people) want you for a trophy. And I don't want to be a trophy. "He gave me a 1959 Rolex, but I'm not going to boast about how much it was worth because I actually took it to Christie's (auction house) and auctioned it. I didn't feel comfortable keeping these things."