Review of Ya Know? Album by Joey Ramone

As iconic frontmen go, there are very few past or present that hold a candle to Joey Ramone. Along with the rest of his stage-ordained "siblings", the man christened Jeffrey Ross Hyman by his parents will always be heralded as a true innovator, his band's first long player preceding the spittle emblazoned likes of The Clash and the Sex Pistols by a good year or so. Unfortunately, as happens with so many artists that pave the way for others to follow, commercial success never really materialised to the extent The Ramones deserved, and despite releasing fourteen albums up to their split in 1996, they struggled to achieve anything beyond moderate levels of acclaim compared to the dizzy heights of those formative years. 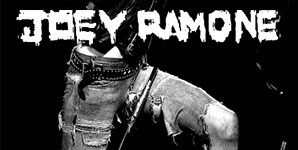 Their influence widespread via a plethora of guitar bands from all genres and backgrounds, The Ramones were finally inducted into the Rock And Roll Hall Of Fame in 2002. Sadly, Joey Ramone wasn't there to see it, having succumbed to the lymphoma that had plagued him since 1995 one year earlier. Despite his illness, he continued to make music right up to his death, as well as occasionally appearing live with and producing 'She Talks To Rainbows', the critically acclaimed comeback album for Ronnie Spector at the tail end of the 1990s.

Its somewhat ironic then that the two solo records attributed to Joey Ramone both appeared posthumously. Whereas 2002's 'Don't You Worry About Me' - recorded between 2000 and 2001 prior to his death - was intended as a collaborative collection of songs with long term Ramones associate Daniel Rey, its perhaps fair to say that '.Ya Know?' is anything but. Comprising of fifteen tracks in total, many of which come in the form of demos and previously unreleased songs that perhaps weren't intended for public consumption as far as their creator was concerned.

Featuring an impressive guest list including the aforementioned Rey, Joan Jett, Stevie Van Zandt and Cheap Trick's Bun E. Carlos among a host of others, it's a slightly ramshackle affair that veers from the sublime ('Going Nowhere Fast', 'Party Line') to the reverential ('New York City' oddly sounds like the Jesus & Mary Chain, a band so indebted to The Ramones for existing in the first place) to the seemingly pointless (do we really need another recording of 'Merry Christmas (I Don't Want To Fight Tonight)'?).

While never half-hearted or emotionless in its execution - what Joey Ramone vocal ever was? - '.Ya Know?' feels as though it was cobbled together in desperation from remnants better left on the cutting room floor. "Everything is going wrong," opines the late lamented frontman on ballsy opener 'Rock 'n'Roll Is The Answer', while 'Make Me Tremble' could have been singularly responsible for the entire C86 movement were it recorded two decades previous.

Purchase this as a token memento to one of rock and roll's finest icons if you must, but as a long lasting reminder of Joey Ramone's true greatness, his band's first three albums along with the fifty-eight song anthology 'Hey! Ho! Let's Go.' remain second to none as largely flawless artefacts of a timeless nature.